Home
Products
About Us
Factory Tour
Quality Control
Contact Us

I want to say that your tape is very good. Thank you for all your suggestion, after sales service is also good.

which also works as a protection layer to prevent chemical erosions and fire retardancy.

This single-sided polyimide film tape product is suitable for the following cases:

Base on the above features, the film tape's benefits can be summarized as the following:

An adhesive transfer has little chance to take effect since the film is virtually having no need to be cleaned.

Reduction adhesive transfer is also depicted in the process of bonding together the subject and the high adhesive.

No rework required. Since polyimide film tape has relatively stable at high temperatures, the chances asking for a replacement built upon other material is relatively low.

Release surface in making of parts cured at high temperatures 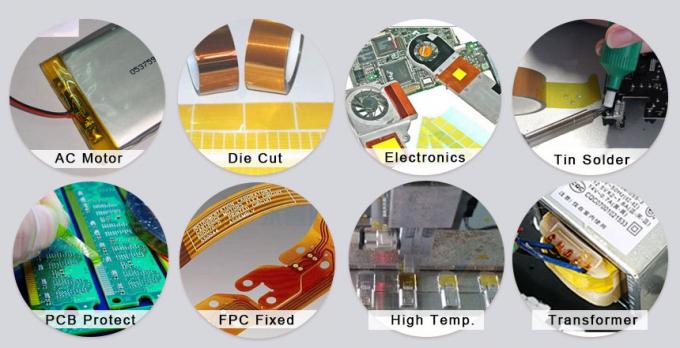 1: Q: Are you a factory or trading company?

We are a factory. We are manufactory more than 22 years experiences in Insulation material industry.

2: Q: Which certification do you have?
A:Our products passed ISO9001-2008,Rohs,SGS certification,you can enter European,American market favorable.

A: For the test sample we can offer you free, but you need pay for the express fee. We also can accept small order at the first cooperation and make production after you paying for us.